In Art Robbery, you will slip into the role of art thieves. The heist was successul and you now have many valuable sketches, paintings, sculptures and antiquities in your possession!

March 18, 1990, Boston. You enter the art museum and one and a half hours later you leave again without anyone noticing and your pockets full to the brim. But now comes the most difficult part... In Art Robbery, you will slip into the role of art thieves. The heist was successul and you now have many valuable sketches, paintings, sculptures and antiquities in your possession! But the treasure isn't endless and you are now facing the biggest challenge: sharing the loot.

You will confront the other players over several rounds, and try and get a part of all four collections. At the end, the thief with the biggest pile of loot will win. But beware, the FBI is ruthless and is looking for you. During the game, collect enough alibis, in order to not get caught. Be strategic and steal your opponent's loot from under their noses. You are thieves after all... Have fun and get rich with a good dose of strategy in this competitive but ultimately simple game.

Be the player with the most points after four rounds. But don’t forget to collect Alibis, otherwise the police will catch you!

- Colourful and modern design from the illustrator Petra Eriksson

- Very competitive and with much interaction

About the author and illustrator

Reiner Knizia is one of the most famous games authors in the world. He studies maths at the University of Ulm, achieved the Master of Science at the Syracuse University in te USA and also obtained a PHD. His true vocation, however, started a lot earlier, when he started developing his first games at the age of eight. He is now the author of over 700 games. He has also won the renowned "Spiel des Jahres" and "Kinderspiel des Jahres" awards. Next to Kariba, Kartel and ZenMaster, Art Robbery is the fourth game he has released with Helvetiq.

Petra Eriksson is a Swedish illustrator and artist based in Barcelona. In her work she likes to play with bright colours and mix organic and graphic shapes.

”I cracked open the box expecting another middle-of-the-ground card game to be quickly forgotten, and found myself falling for its simple rules, energetic pace and stunning look.“ 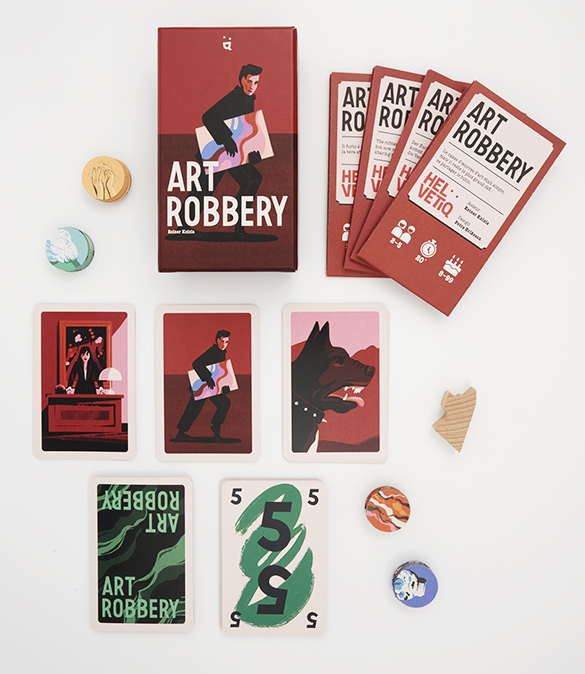 Related Products
Related Products
Check items to add to the cart or
Recently Viewed
Related posts
Arrow up
Search engine powered by ElasticSuite
Fr.19.90
We use cookies to give you the best online experience. By using our website you agree to our use of cookies in accordance with our cookie policy.
More information
Accept Close
Cookie Settings